I'm not going to lie.  It's straight embarrassing to now poke my head up from out of the sand to reenter the blogging world.  It's been crazy long.  Like a teetering right on the precipice of the point of no return sort of long.  But as some wise old man or woman once said, better (super) late than never.

What have I been up to?  Er, raising two human beings who are now almost 2 years of age?  I can't really sum it all up in one entry, but I can tell you that it has been tremendous, poignant, mind numbingly boring, amazingly rewarding, stressful, exhausting, frustrating, aimless, dreamy, blissful, isolating and... absolutely precious, all at once.  Sometimes it feels like you're running a marathon with no real finish line in sight.  There's motherhood for you.

It's been an exercise in learning near complete selflessness- temporarily putting all else aside to try to provide the most nurturing, enriching, loving environment for two soft new human beings to thrive in.  It's also been a humbling look at my own reflection, which is full of impatience, grumpiness, pride, self-centeredness...

The babies are now almost 2 and getting ever so independent (without having the skills yet to really do stuff themselves).  One of their favorite words for the past several months is "SELF".  SELF to when I try to feed them.  SELF to when I try to put on their shoes.  SELF to when I try to carry them or grab their hands while walking through a parking lot.  Of course after a few moments of fumbling and frustration, this is usually followed by a "HELP ME".  Ah, how precious this age is.

Along with their independence is mama's antsiness to regain some of her freedom.  I'm not talking about leaving the babies to go party it up or anything, but to regain a little bit of my identity.  A lot of brainstorming has been taking place over the past year or so and hopefully I'll get the train moving on one of these fronts within the next year.

That's all I have for now homies.  And true to form, a few pictures... 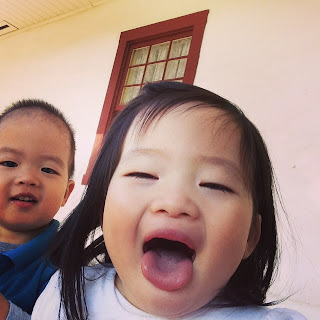 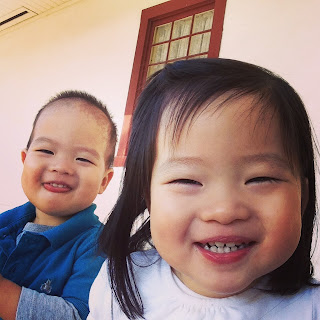 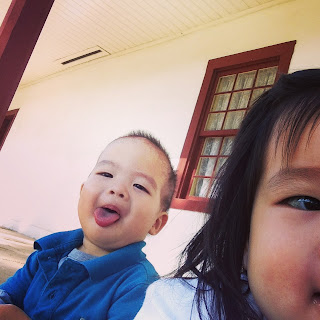 Posted by Jiyoonie at 2:03 PM No comments:

Hi out there!  Just wanted to let you know I'm still alive...  I decided that I needed to focus on a few projects this past month and as you might be able to imagine, twins + a few projects = no time!  BUT... I'll be back in full force come 2012.  Can't believe it's already just right around the corner!  In the meantime, here's a video to brighten your day!

What happens in Vegas (thankfully) stays in Vegas

So I'm happy to report that we made it back in one piece from Vegas this past weekend.  A couple things I've learned from this trip:


But to end the whining on a positive note, I will say, it's pretty awesome to see the looks on babies' faces the first time they experience something and to literally witness their minds opening up right before your eyes.  For them, every day is chock full of firsts and just to be able to provide them with colorful, albeit sometimes stressful and tiring, experiences really does make it all worth while in the end.
And of course a few pictures to wrap this up. 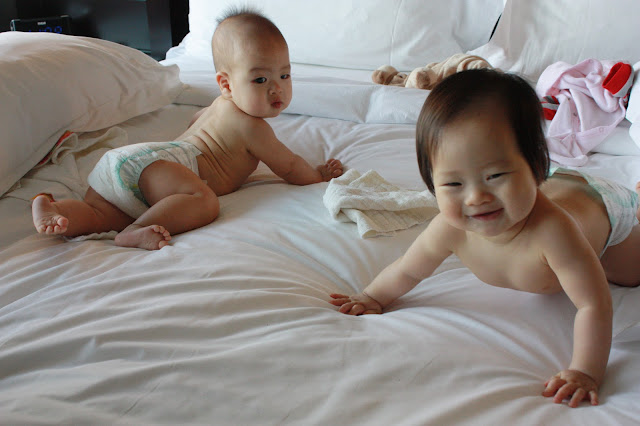 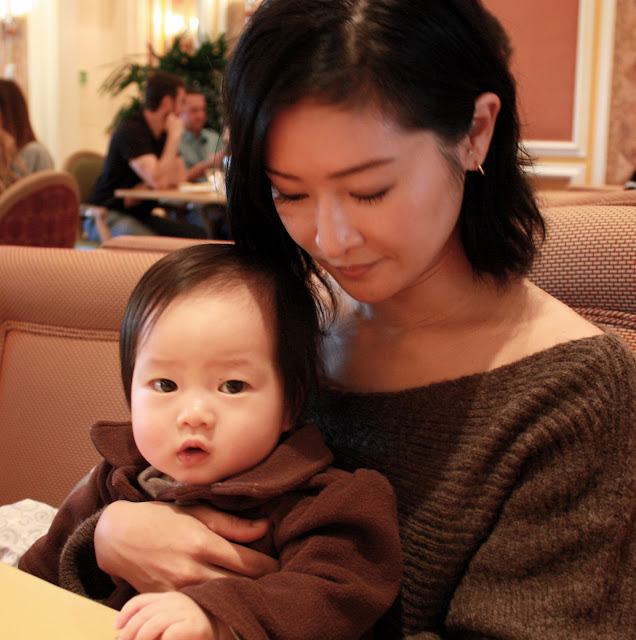 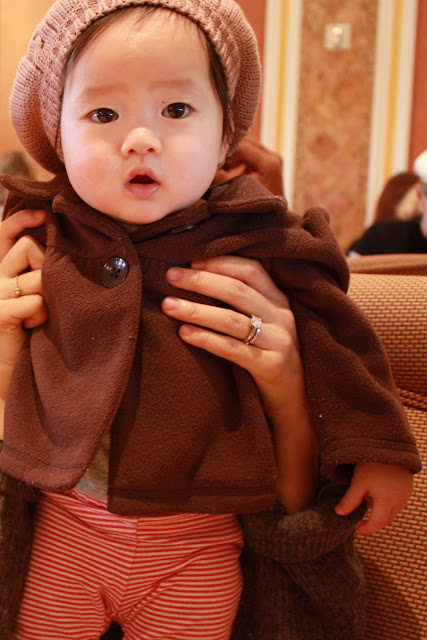 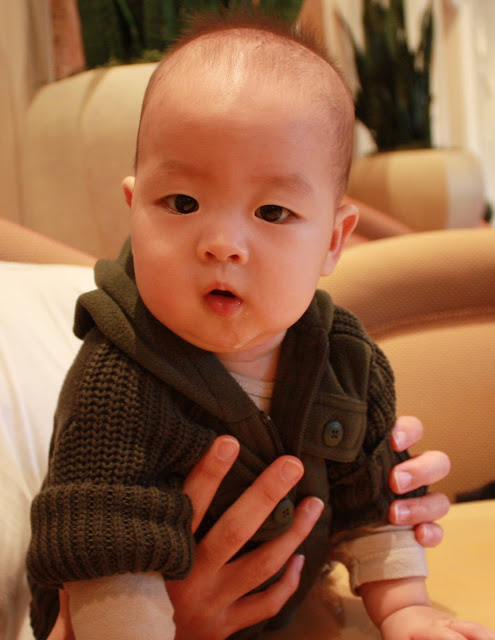 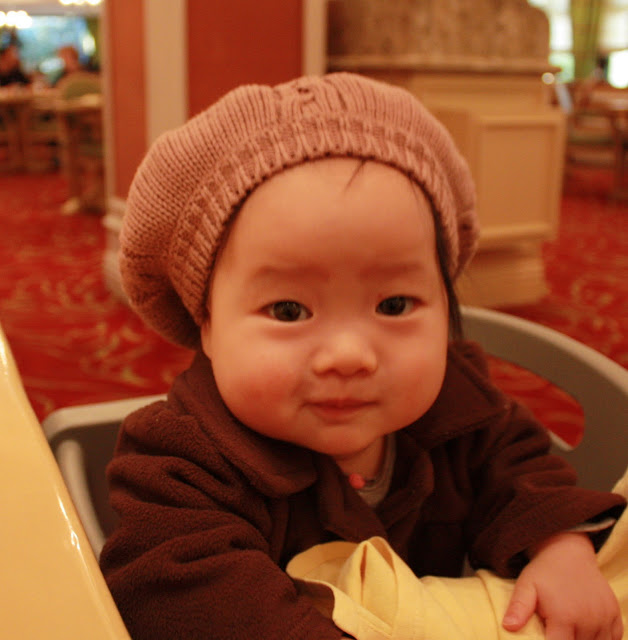 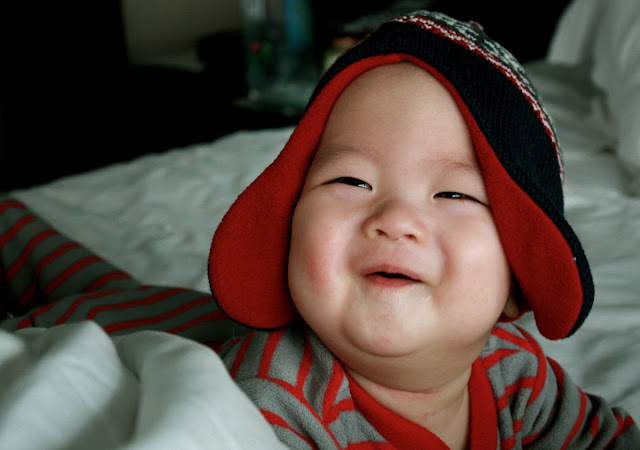 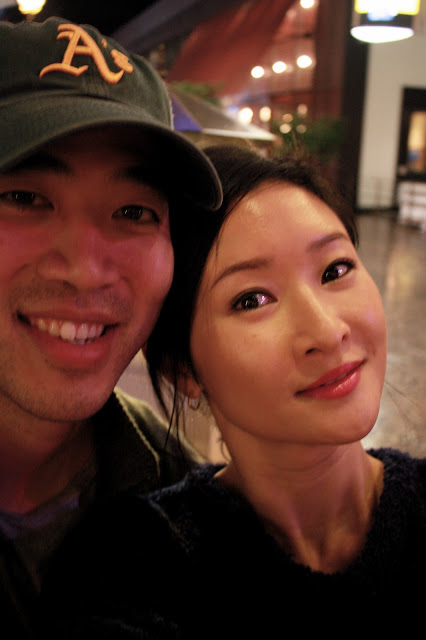 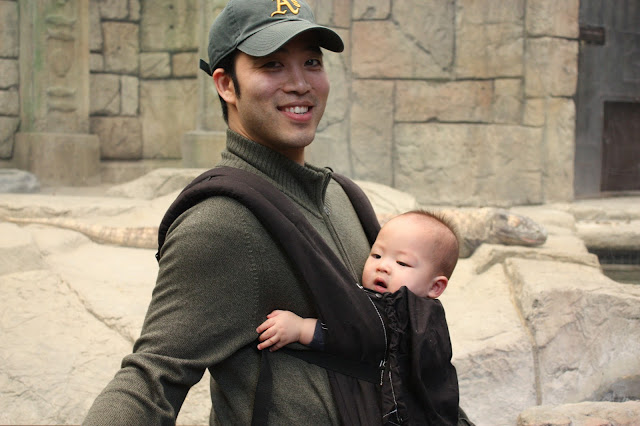 Mama's signing off.  Need to rest my tired eyes!
Posted by Jiyoonie at 10:44 AM 5 comments:


Simple and inspiring.
Posted by Jiyoonie at 9:52 PM No comments:

Odds and ends and an addiction

This weekend was just one of those weekends where it seemed like each day was 48 hours without a moment's rest.  In other words, really really long and painful.  A bit of an exaggeration, but with both nuggets teething and refusing to eat their dinners and having to wrestle with them with each bottle, there were at least a few Calgon moments.


Isn't it super adorable how babies discover a new trick and then proceed to turn it into an obsession?  Like looking at the world upside down.  I totally get it though.  It's like discovering you're a superhero or something.  All of sudden, being able to do a really cool and seemingly magical thing upon waking up one day.  Ah, to start with a completely blank canvas once again... 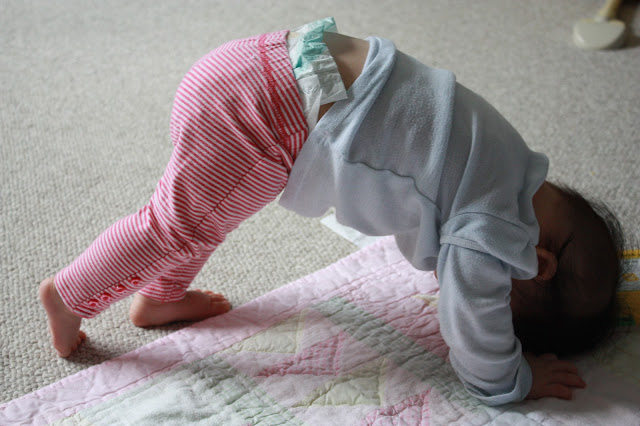 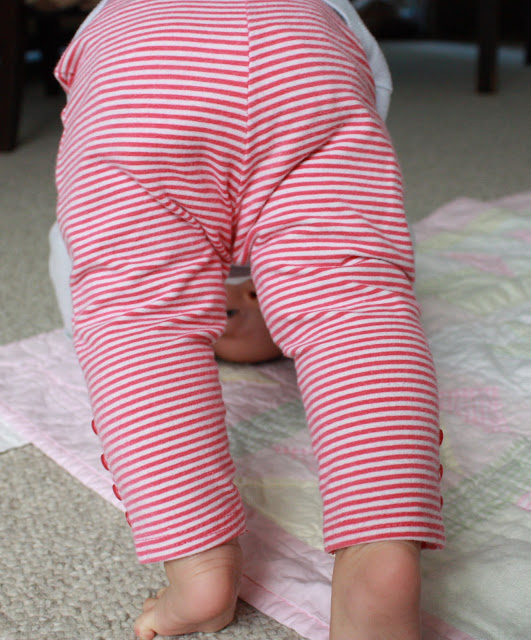 Drinking from sippy cups is fun. 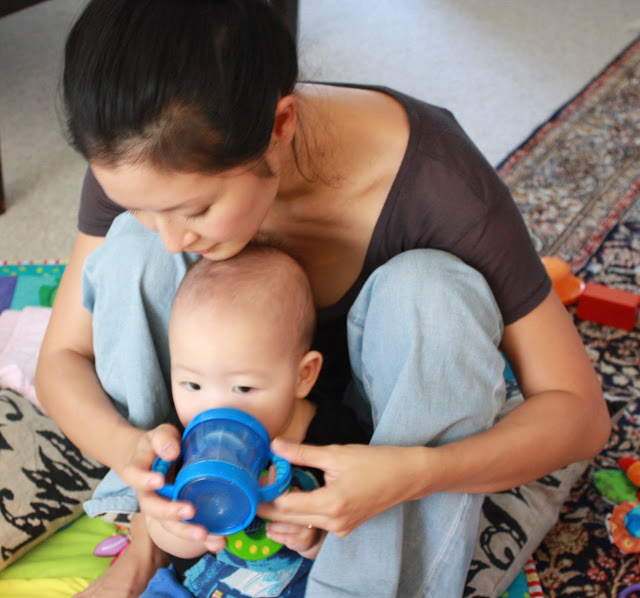 Messing around with my camera. 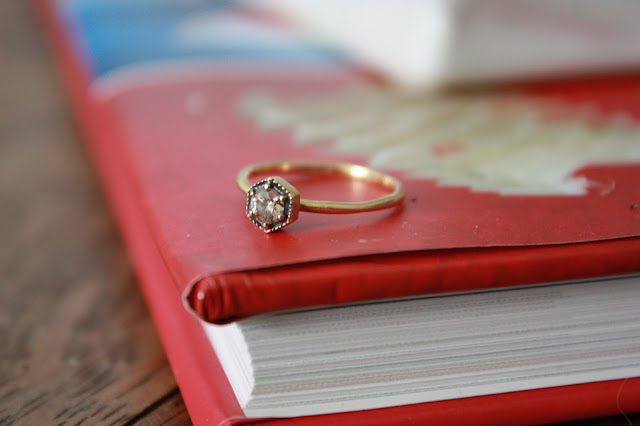 And after one lesson, I think I'm somewhat addicted.  I hope the addiction lasts long enough for me to learn how to actually make something cool. 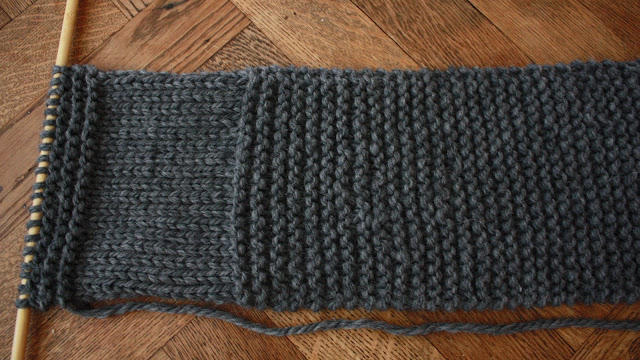 Lastly, not a really accurate shot of the new do since it's still sopping wet here, but I like it.  It's not dramatic nor all too different from what my hair looked like before I got it cut, but it's lighter and even more of a "step out of the shower and go" type of style.  I'm all about simplicity nowadays.  :) 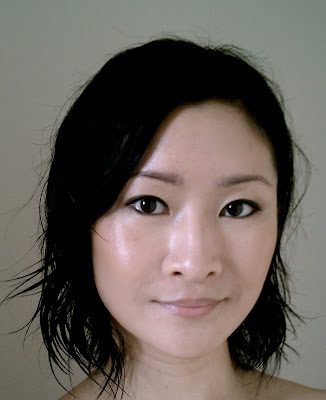 So I came back from Pilates early this morning (I'm so very proud of myself for going, as sleep deprived and lazy as I am) and noticed that I haven't shaved in forever.  Ok, before you get any images of hairy man legs in your head, I will say I'm asian.  But still... let's just say it wasn't that cute.

I bought an Emjoi Epilator a while back when all the makeup gurus on YouTube were raving about it since I'll admit, I can be a sucker for good marketing, but haven't really pulled it out all that much since.  However, after using it this morning, I remembered just how effective and easy it is to use. 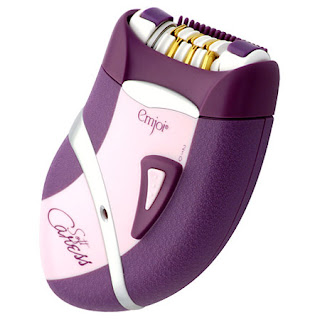 Without getting into the hairy details (like that?), think of it as a bunch of tiny tweezers that grab onto even the finest of hairs and pluck them out as the head of the epilator rotates.  You just sort of sweep your legs, pits, whatever, in short strokes and voila!  Hair gone!  The best part is that, just like waxing, the removed hair doesn't grow back nearly as quickly as it does when you shave, and when it does, it's pretty wispy unlike the blunt ends of shaved hair.

In terms of pain, it literally feels like tiny little static shocks or something.  It's really not that painful at all, although my husband would probably beg to differ (I tried it on his arm and he starting screaming in pain even before it made contact with his skin).  I can't say how painful it would be for people with really dense or thick hair but I will say it's quick so at least the pain won't last that long.

What's in store this week

I've been in full time mommy mode and also on an internet diet.  It's hard I tell you!  But when you literally have 3 hours to yourself a day while the babies are napping, I don't think surfing the web is the best use of my time.  Need to turn away- at least for a bit to reset...


Have a productive week everyone!
Posted by Jiyoonie at 12:56 PM No comments:

Jiyoonie
I am an attorney who decided to give notice one day to spend more time with the joys of my life and dust off the old right side of this brain. You'll probably find this blog to be a bit random at times. Have fun!